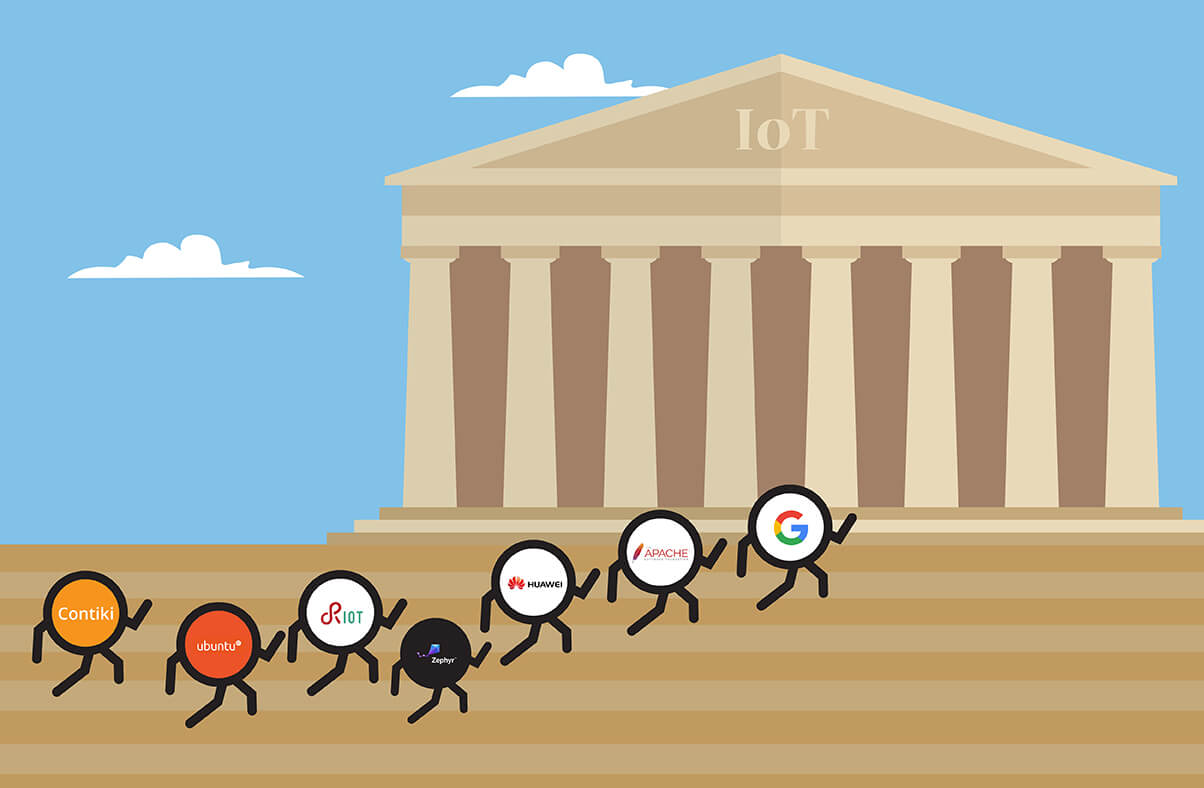 The power of Open Source is the power of the people.  The people rule

The open source movement which started in 1998 as a niche went on to become a mainstream movement after the success of projects like Linux, Ubuntu, MySQL, Apache, etc. Later on, big companies like IBM, Microsoft, and Apple started using the open-source software development model.

Today, companies in IoT space like Samsung, Google, Huawei, and ARM are embracing the open source model by opening up their projects (both hardware and software) to the developer community and inviting them to contribute in building a world that is technologically reliable and robust.

Here are 7 operating systems for IoT devices that are open source and used to power a wide range of smart devices from wearables to driverless cars.

Note: All the operating systems that I’m writing about have two properties in common:

Google offers this as an Android-based operating system for embedded devices. It can run on constrained/low-end devices with at least 128MB of ROM and 32MB of RAM.

Brillo supports intercommunication technologies such as

It was created in 2002 by Adam Dunkels and, currently, has developers all over the world. This open source software is released under a BSD license. Contiki has a built-in Internet Protocol suite (TCP/IP stack) and provides multitasking. It can comfortably work on constrained devices with 30KB of RAM and 30KB of ROM.

Contiki is supported on hardware platforms such as

RIOT is an IoT operating system with real-time capabilities. It was first developed by a consortium of universities in Germany and France, which included Free University of Berlin, French Institute for Research in Computer Science and Automation, and Hamburg University of Applied Sciences. It is released under the GNU Lesser General Public License (LGPL).

It is based on microkernel architecture and runs on 8-32bit microcontrollers. RIOT supports multi-threading and the entire IoT network stack, which includes

RIOT can run on constrained devices with a minimum of 1.5KB of RAM and 5KB of ROM; it supports architectures such as

It is developed by Chinese telecom giant Huawei. It was released in 2015 under ISC license. LiteOS is a real-time operating system of just 10KB in size and it supports advanced features such as

It supports interconnection technologies such as

Kernel of LiteOS supports multi-CPU architectures such as

LiteOS can be installed on devices already running on Android, and it can be connected with various other third-party devices.

Similar to RIOT and LiteOS, Apache Mynewt is also a real-time operating system for IoT devices.

The source code of Mynewt is distributed under Apache License 2.0. The OS is capable of running on  constrained devices with a minimum of 8KB of RAM and 64 KB of ROM. The Kernel of the OS is just 6KB but supports the following:

The biggest drawback of Apache Mynewt is its interconnection technology; as of now, it only supports Bluetooth low energy, but Wi-Fi, Thread, and Bluetooth 5 are part of the roadmap.

This is a collaborative project under Linux Foundation and is available through the Apache 2.0 license. It was launched in February 2016.

In Zephyr OS, there are no loadable kernel modules because the kernel is statically compiled into a single binary executable file. This makes Zephyr safe from compile time attacks.

Zephyr is a real-time operating system which can run on a device with memory as  small as 8KB. The biggest strength of Zephyr is its interconnectivity technology, which includes

Canonical, the company behind Ubuntu, recently released Ubuntu Core 16, which is also known as Snappy. It is called Snappy because the operating system (including Kernel, libraries and major applications) is delivered as a Linux application package known as snaps. The base file of Ubuntu core 16 is 350MB and all the files after installation are stored as images.

The Ubuntu Core 16 is compatible with the following boards:

Open source is not just a business model or software development model but is a big opportunity for both professional coders and hobby programmers to touch a billion people and change their lives forever by contributing to opensource projects and pushing good code.

Vasudhendra Badami is a category head (IoT) at HackerEarth. A writer by day and a reader by night. Covers topics like Internet of Things, electronics and analytics. You can find Vasudhendra on Twitter (@BadamiVasu)