Tower of Hanoi game is a puzzle invented by French mathematician Édouard Lucas in 1883.

History of Tower of Hanoi

There is a story about an ancient temple in India (Some say it’s in Vietnam – hence the name Hanoi) has a large room with three towers surrounded by 64 golden disks.

These disks are continuously moved by priests in the temple. According to a prophecy, when the last move of the puzzle is completed the world will end.

These priests acting on the prophecy, follow the immutable rule by Lord Brahma of moving these disk one at a time.

Hence this puzzle is often called Tower of Brahma puzzle.

Tower of Hanoi is one of the classic problems to look at if you want to learn recursion.

It is good to understand how recursive solutions are arrived at and how parameters for this recursion are implemented.

What is the game of Tower of Hanoi?

Tower of Hanoi consists of three pegs or towers with n disks placed one over the other.

The objective of the puzzle is to move the stack to another peg following these simple rules.

Before we proceed, let’s understand Recursion –

When a function calls itself, it’s called Recursion.

It will be easier for those who have seen the movie Inception.

So it’s like there is a function called dream()dream(), and we are just calling it in itself.

Recursion is useful in solving problems which can be broken down into smaller problems of the same kind.

But when it comes to solving problems using Recursion there are several things to be taken care of.

Let’s take a simple example and try to understand those.

Following is the pseudo code of finding the factorial of a given number XX using recursion.

Detailed explanation to Recursion can be found – Here

Take an example with 2 disks: Disk 1 on top of Disk 2 at peg A. The target is to move both these disks to peg B.

You can easily move this stack from peg B to any other peg using these 3 steps.

To move the stack to peg B you would have to expose disk 3 and to do that disk 1 and 2 have to be moved to peg C.

So by ensuring that you do not break the rules, using the above subsets of 3 steps in the previous case, you would move disk 1 and 2 to peg C, leaving disk 3 exposed with no disk above it.

Now to solve the problem, recursively move disk 3 from peg A to peg B.

Then disk 1 from peg C to peg A. After which disk 2 can be moved above disk 3 at peg B.

The puzzle is finally completed by moving disk 1 from peg A over disk 2 and 3 at peg B.

What if you have 4 disks?

Eventually, you figure out that there is some pattern to the puzzle and with each increment in disks, the pattern could be followed recursively.

Check the GIF here for 4 disks

Call the function ‘tower’ in the main program

So, the number of steps almost double every time you insert another disk in the stack.

The question is what is the minimum number of moves\((a_N)\) required to move all the \(N-\)disks to another peg.

Let’s look at a recursive solution

For a given \(N\) number of disks, the way to accomplish the task in a minimum number of steps is:

Therefore, the recurrence relation for this puzzle would become:

Now one can solve this relation in an iteration as follows- 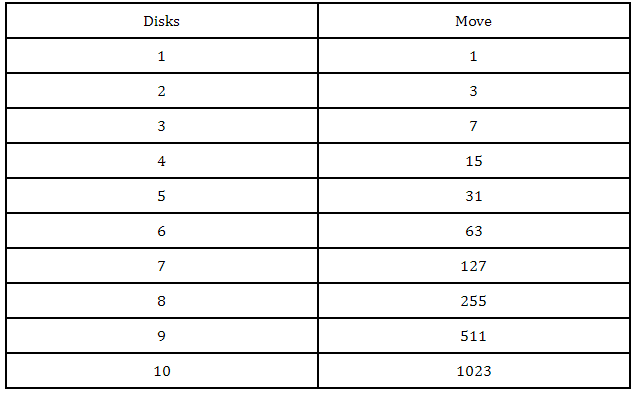 But what about the prophecy for the tower of Hanoi where the priests are using 64 disks?

Suppose that these priests are highly powerful and can move these massive disks at a speed of 1 per second per hour every day.

Here is one such question from HackerEarth Challenge

Q. Bob and Alice like to play the game Tower of Hanoi. One day Alice challenges Bob to build the tallest tower from a set of disks of different height and radius. The Tower of Hanoi can be built by stacking disks on top of each other. To put disk A on top of disk B, the radius and height of A must be strictly smaller than those of B. Help Bob win the challenge.

Here is the Tower of Hanoi program using C++

Time to end the world on a doomsday or by Tower of Hanoi all can be calculated by mathematics.

Mathematics holds the solution for most of the complex problems, from football betting to banking.

Practice and learn more such algorithms and on CodeMonk and participate in HackerEarth challenges.