At HackerEarth, we use MySQL database as the primary data store. We have experimented with a few NoSQL databases on the way, but the results have been largely unsatisfactory. The distributed databases like MongoDB or CouchDB aren’t very scalable or stable. Right now, our status monitoring services use RethinkDB for storing the data in JSON format. That’s all about using NoSQL database for now.

With the growing amount of data and number of requests every second, it turns out that the database becomes a major bottleneck to scale the application dynamically. At this point if you are thinking that there are mythical (cloud) providers who can handle the growing need of your application, you couldn’t be more wrong. To make matters worse, you can’t spin a new database whenever you want to just like you do with your frontend servers. Achieving horizontal scalability at all levels requires massive re-architecture of the system while being completely transparent to the end user. This is what a part of our team has focused on in the last few months, resulting in high uptime and availability.

It was becoming difficult for the master (and only) MySQL database to handle the heavy load. We thought we will delay any scalability at this level till the single database could handle the load. We would work on other high priority tasks instead. But that wasn’t to be, and we experienced some down time. After that we did a rearchitecture of our application, sharded the database, wrote database routers and wrappers on top of django ORM, put HAProxy load balancer infront of the MySQL databases, and refactored our codebase to optimize it significantly.

The image below shows a part of the architecture we have at HackerEarth. Many other components have been omitted for simplicity. 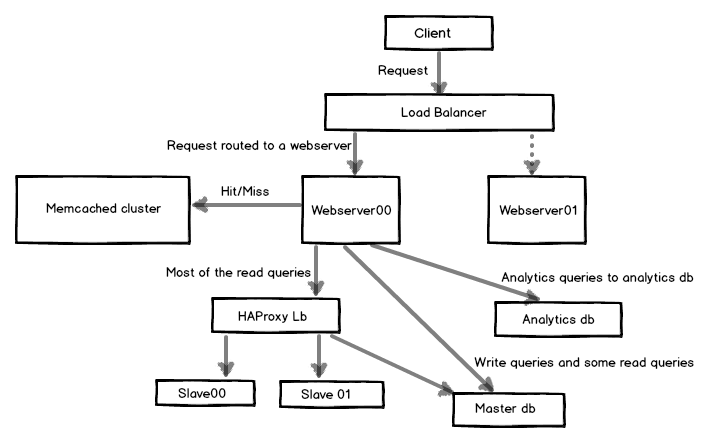 The first database router was simple:

A snippet of /etc/haproxy/haproxy.cfg:

The configuration for the slave in settings now looked like this:

But there is a caveat here too. If you spin off a new server with the HAproxy configuration containing some endpoints which don’t exist, HAproxy will throw an error and it won’t start, making the slave useless. It turns out there is no easy solution to this, and haproxy.cfg should contain existing server endpoints while initializing. The solution then was to let the webserver update its HAproxy configuration from a central location whenever it starts. We wrote a simple script in fabric to do this. Besides, the webserver already used to update its binary when the spin off is from an old image.

Next, we sharded the database. We created another database — analytics. It stores all the computed data, and it forms a major part of read queries. All the queries to the analytics database are routed using the following router:

To enable the two routers, we need to add them in our global settings:

At the end, we had an architecture where we could spin off new read replicas and route the queries fairly simply and had a high performance load-balancer in front of the databases. All this has resulted in a much higher uptime and stability in our application, and we could focus more on what we love to do — building products for programmers. We already had an automated deployment system in place, which made the experimentation easier and enabled us to test everything thoroughly. The refactoring and optimization that we did in codebase and architecture also reduced the server count by more than two times. This has been a huge win for us, and we are now focusing on rolling out exciting products in the next few weeks. Stay tuned!

I would love to know how others have solved similar problems. Do give suggestions and point out potential quirks.

This post was originally written for the HackerEarth Engineering blog by Vivek Prakash.

Guest Author
Our guest articles are a collection of the best contributions made by members of the developer community on our blog. Discover articles on a wide range of topics, shared by top programmers across the world.